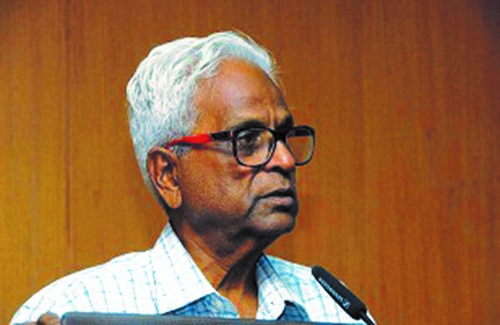 I have the pleasure of receiving a copy of the inaugural issue of Sthapatyam. Journal of the Indian Science of Architecture and Allied Sciences (Issue : 1, Vol : 1 May 2014).

Shri Ramendra Pandey, the founder editor of the Journal, his dedicated team of editorial board and the distinguished art historian Dr. Deenbandu Pandey have brought out a journal which heralds a new era in the study of Indian architecture. Their concerted effort is particularly praise-worthy for finally placing architectural aspects of Indian civilization in a holistic perspective.

The inaugural issue clearly emphasizes the fact that Indian world view of architecture emphasizes as much the form as spirit. In his editorial, Ramendra Pandey has rightly pin pointed that the divinity of this planet has been clearly propounded by the Vedic seers, leading to the sublime stage where material earth becomes spiritual mother. In brief, the Vastusastra which offers a global, cosmic perception of built-in-space has been presented in a wider perspective. How place acquires specific, symbolic meaning and value rightly becomes the main thrust of the inaugural issue. The paper entitled Tirumala-Tirupati by Ramendra Pandey decodes the architectural symbolism of this most revered pilgrim Centre of India.

In the next paper of this inaugural issue, Professor Deenbandu Pandey has offered a rare example of an in-depth study of the seventh line of inscription of Samundragupta inscribed on an Asokan Pillar which is now planted at Allahabad. His efforts clearly demonstrate the necessity to carry out micro-studies to set in perspective the study of ancient Indian past. In his study of Patliputra, Ramendra Pandey analyzes historical and geographical changes over 2600 years as per rules of the Vastusastra, revealing new facts and opening up new horizons of understanding. Mughal architecture in Modern Punjab by Dr. Gurucharan Singh and Mr. Gurmej Singh is another landmark contribution, emphasizing this phase of Indian architecture as ‘‘a veritable chronicle in stone.’’ Fort, Sarai, mosques complete the panorama of Mughal Architecture. Manoj S. Nair makes a strong meaningful plea for cultivating a nature friendly habitat culture through Vastu.

Through the study of Mandalas—diagrams, designs and color schemes, yet another joint paper by Dr. Prabhakar Apte and Dr. Bharati Mate explores the potentials of Indian architecture in the broader framework of Vastusastra. The famous cultural geographer Professor R.P.B.Singh establishes interfaces between Hindu cosmology and Leonardo da Vinci, highlighting proportions derived from human body both in ancient Roman and Hindu traditions.

Renu Pandey, Jnanendra Narain Rai, Lalata Prasad Pandey have enhanced the value of Sthapatyam through their contributions in Hindi, upholding the national ethos required for the study of Indian traditional science of Vastusastra. As a bilingual journal giving equal importance to writings in English and Hindi. I am confident, this new endeavor will bring about a revolutionary change in our attitude towards traditional sciences of India, particularly architecture (sthapatya) in the wider context of built-in space (Vastusastra).